Now, cutting-edge underwater drones and robots are being developed that could make the work safer, cheaper and less polluting.

Among them is Eelume, a six-meter-long, snake-like robot kitted out with sensors and a camera at each end. It can be kept at a docking station at depths up to 500 meters (547 yards) for six months, without being brought back to the surface.

The self-propelling robot can travel up to 20 kilometers (12.4 miles) before needing to return to its station to recharge. It can also swap out parts for different tasks, including tools to operate subsea valves, and cleaning brushes to remove marine growth and sediments.

Maintenance work at many deep-water wells and pipeline systems is already carried out by unmanned vehicles. But these vehicles typically need to be transported to the offshore site on a fully crewed ship and then remotely operated from onboard the surface vessel. That can cost up to $100,000 per day, according to Pål Liljebäck, chief technology officer with Eelume Subsea Intervention, which developed the robot.

Based in Trondheim, Norway, the company was spun off from the Norwegian University of Science and Technology. Liljebäck says that by “enabling the robot to become a subsea resident living in a docking station, it can be mobilized at any time to do inspections and intervention tasks, and thereby reducing the need for costly surface vessels.”

Eelume can work autonomously on tasks assigned from a control room onshore, and send back video and data. Its snake-like design allows it to work in confined spaces and wriggle its body to stay in place in strong currents. By docking under the sea, it can be deployed whatever the conditions on the surface of the ocean. 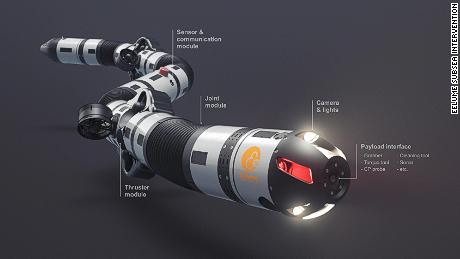 The global underwater robotics market is expected to be worth around $7 billion in 2025, according to analysts, and other companies are in the process of commercializing novel deep-sea drone and robot technology.

Saipem (SAPMY), an Italian company providing services for the oil, energy and infrastructure sectors, has created the Hydrone-R underwater drone, which can dive to 3,000 meters for construction and maintenance work. US startup Houston Mechatronics has developed the Aquanaut, a subsea robot vehicle that can be remotely operated or work autonomously, while Sweden’s Saab Seaeye Falcon vehicle is already being used to carry out inspections in Chile’s fish farms. 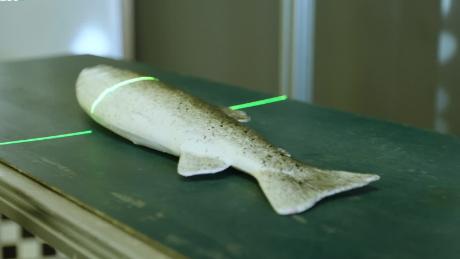 Norwegian oil company Equinor was an early investor in Eelume. “It will reduce our costs by using a cheaper method to do maintenance and repair. Instead of our employees working in dangerous conditions offshore, we can put them in an onshore control room,” Pål Atle Solheimsnes, lead engineer with Equinor, tells CNN Business.

The oil and gas industries are major contributors to climate change, and deep water exploration can damage the marine environment. But Atle says Eelume can have environmental benefits. “The diesel burning surface vessels emit a lot of CO2 but robots, like Eelume, emit almost nothing.”

Eelume Subsea Intervention and Equinor will carry out final testing on the seabed later this year at the Åsgard oil and gas field. Eelume says it expects to deploy its first snake robots next year and hopes to have up to 50 in oceans around the world by 2027.

Read More: This ‘snake robot’ can fix pipelines on the ocean floor