DALIAN, China — Chinese industrial robots still have some catching up to do in terms of technology, but they are roughly 30% cheaper than Japanese and European counterparts, an opening Chinese manufacturers are set to exploit to gain ground in their home market.

After years of being bested by Japan’s Fanuc, Swiss player ABB and other powerhouses, Chinese industrial robot manufacturers have gone on the offensive, ramping up capacity to boost their domestic market share from 30% to the government-set goal of 50%.

Nanjing Estun Automation, the top Chinese performer in the domestic market, is one of them.

Estun is building a new location that will “accelerate growth of the robot industry,” read a Tuesday statement from officials in Foshan, a city in Guangdong Province near Hong Kong, after the city sold a plot of land to the company.

The site, scheduled to open by 2024, is expected to double as a factory and an research-and-development center, likely tapping the laser and sensor technologies of Carl Cloos Schweisstechnik, the long-established German company Estun acquired last year for about 200 million euros ($234 million). The company is expected to work on high-precision welding robots there.

Estun also plans to open other production and R&D sites slated to come on stream starting in 2023. To finance these activities, the company won shareholder approval last month to raise about 800 million yuan ($123 million) through issuance of new shares.

The private-sector company, founded in 1993, has been acquiring cutting-edge technologies through the purchase of at least five Western companies since 2016, including those from Italy, the U.S. and Germany. The shopping spree has quintupled revenue over five years to 2.5 billion yuan for 2020.

The acquisitions helped Estun grow. It ranks eighth in China’s industrial robot market, the sole domestic player in the top 10, according to research company MIR.

Estun is not alone in expanding capacity. At least seven companies have unveiled plans to bolster facilities so far this year. Siasun Robot & Automation — which bought a South Korean company in 2018, is set to spend roughly $222 million for a new factory among other steps. Efort Intelligent, which acquired four overseas peers by 2019, is to complete a factory by the end of 2023.

The push for increased output comes at a time when the Chinese robot market is rapidly expanding — mostly to the benefit of multinational giants.

Industrial robots are crucial to the the Made-in-China 2025 initiative, aimed at transforming the country into a high-tech manufacturing powerhouse. The goal is not just increase production capacity, but to increase production efficiency and to spur technological advances.

Seeing industrial robots as key to improving productivity and precision on factory floors, the government has offered generous subsidies to advance research and development. 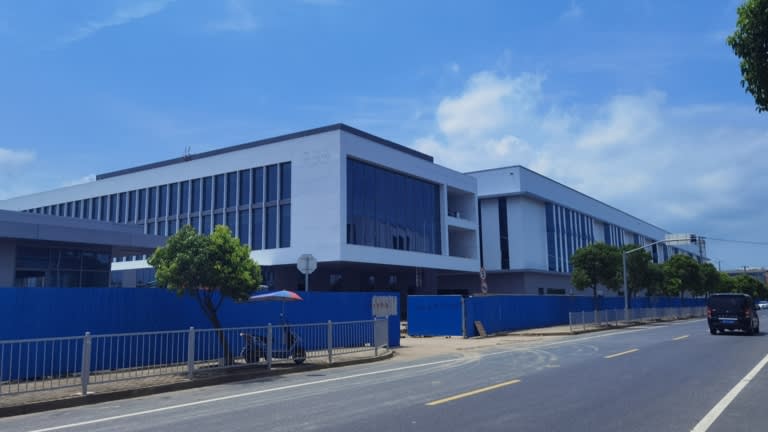 Determined to guard its market share, ABB is also building a robot factory in China. (Photo by Shin Watanabe)

Industrial robot sales in China doubled between 2016 and 2020 and are on track to jump 48% in the five years through 2025, MIR forecasts. But Chinese robot makers are not benefiting greatly from the market growth, accounting for just 29.2% in 2020. Their share will rise no more than about 39% in 2025, MIR predicts.

Chinese factories prefer the foreign-made robots “because their movements are more accurate and they are more durable,” said a Chinese industry insider, acknowledging that there is a technological gap in decelerators and other core parts and software.

Instead Japanese and European players are the leaders, with nine of the top 10 — including Fanuc, ABB, Yaskawa Electric and Germany’s Kuka — taking a majority of the market.

However, these high-performance robots from foreign players are pricey, which means only a small number of companies can afford them and in turn has hindered the spread of industrial robots in China. The country ranks 15th in robot density — the measure of the number of robots used per 10,000 workers — with 187 units, far behind top-place Singapore’s 918 and No. 2 South Korea’s 868.

Many midsize manufacturers in China are unable to tap robot resources, and this is where domestic robot makers see their opportunity.

“Industrial robots are growing more prevalent thanks to the rise of Chinese producers, whose prices are about 30% lower than foreign companies,” said a MIR analyst.

As these Chinese-made robots offer improved technologies through overseas acquisitions, they become attractive alternatives to foreign-made machines for many midsize manufacturers. Increasing ranks of companies that employ industrial robots will also likely help elevate the overall level of Chinese manufacturing.

But winning market share will not be easy as foreign rivals also step up investments.

ABB is opening a new factory in Shanghai in 2022, and Fanuc is upgrading its facility in the same city in 2023. Yaskawa is building a facility to manufacture core parts near an existing robot plant in Jiangsu to shorten the lead time.