10 most memorable robotics stories of 2022

The robotics industry had its fair share of memorable moments in 2022. Here we take a look back at our picks for the most memorable robotics stories of the year.

The list is comprised of moments that made us laugh and cringe, as well as moments that left us surprised or amazed at the capabilities of various robots. What did we miss? Please let us know in the comments what you’ll remember most from 2022.

Subscribe to The Robot Report Newsletter to stay updated on the robotics stories you need to know about.

According to NASA, nearly every Mars rover has experienced dust devils. But the Perseverance rover is the first to capture audio of one. In December 2022, NASA released the audio, adding that it could help scientists better understand how dust might affect future Mars missions.

NASA said capturing a passing dust devil takes some luck, adding that this first-of-its-kind recording was around a 1-in-200 shot. Scientists can’t predict when they’ll pass by, so rovers like Perseverance routinely monitor in all directions for them.

“Here goes something,” narrated the attraction’s soundtrack as Spidey took flight. According to Disney, the robot makes its own, real-time decisions when to tuck, somersault and slow down while soaring 85 feet in the air. But halfway through, the robot’s limbs locked up, rendering it a mere projectile. It crashed right into W.E.B. building. Nobody was hurt during the crash, and the attraction was up and running again a few hours later.

Elon Musk unveiled at Tesla AI Day the company’s much-anticipated Optimus humanoid robot. Last year, of course, the “robot” was simply a human dressed in a robot suit. This time, Tesla, albeit briefly, actually demoed a working prototype that walked, waved, and danced on stage. Tesla also played videos that showcased the Optimus prototype doing different tasks, such as picking up boxes in a warehouse and watering a plant in an office.

Musk unabashedly claimed Tesla will be able to leapfrog other humanoid developers, such as Agility Robotics and Boston Dynamics, in part because Optimus uses the same neural networks as Tesla’s Autopilot technology. The robotics industry watched Tesla AI Day in earnest to see exactly what Optimus would be this time around. Many experts agreed the technology inside Optimus lags behind the competition, but they were impressed with how quickly Optimus was built.

Riding in a Waymo around SF

I’ve been fortunate enough to ride in several robotaxis over the years, but none were better than my ride with Waymo around San Francisco in October. It was a roughly 9-mile ride that took just under 30 minutes. Because I’m not a Waymo employee, there was a human safety driver behind the wheel.

The route we took had a myriad of obstacles, including multiple unprotected left turns, pedestrians crossing streets and sidewalks, bicyclists, narrow streets, double-parked Amazon delivery trucks and construction vehicles cutting us off. As you would hope, the trip was flawless and uneventful. Actually, it was quite boring. 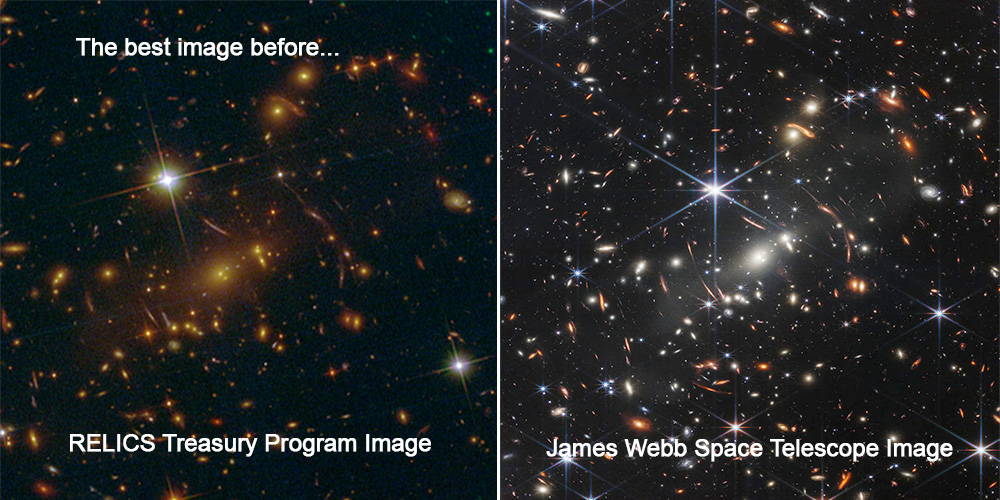 NASA released the first science image from the James Webb Space Telescope in July 2022 during a press conference with President Joe Biden. The image was of SMACS J0723.3-7327. What you see in the image is an area of space that includes the faintest objects ever observed in the infrared.

This slice of the vast universe covers a patch of sky approximately the size of a grain of sand held at arm’s length by someone on the ground. The light in this region goes back 13+ billion years.

In April 2022, a video surfaced of an interesting interaction between a Cruise robotaxi and San Francisco police officers. The Cruise robotaxi is stopped at a red light, with a police car behind it. As the light turns green, a member of the SF police officer gets out of his car and approaches the robotaxi, apparently because the vehicle’s headlights weren’t on. The police officer tries to open the driver’s side door, but it’s locked. As he heads back to his police car, the Cruise robotaxi drives off before quickly pulling over and flashing its hazard lights less than 10 seconds later.

The internet went crazy with all kinds of jokes about police chases, but Cruise said things went according to plan.

“Our AV yielded to the police vehicle, then pulled over to the nearest safe location for the traffic stop, as intended. An officer contacted Cruise personnel and no citation was issued,” Cruise tweeted. “We work closely with the SFPD on how to interact with our vehicles, including a dedicated phone number for them to call in situations like this.”

A seven-year-old boy’s finger was broken by a chess-playing robot during a tournament in Russia back in July 2022. The video shows the robot playing on three chessboards simultaneously. The boy makes a move when the robotic arm lowers onto his hand. Four men rush in to help, the boy’s finger is freed, and he is taken away.

The story captured the world’s attention, and tournament officials at one point blamed the child for making a move the robot didn’t understand.

We discussed this incident at length on The Robot Report Podcast with Nima Fazelli, an assistant professor of robotics at the University of Michigan. Fazelli created a famous Jenga-playing robot during his days at MIT. He discussed the lack of basic safety protocols with the chess-playing robot, the poor choice of using an industrial robot, the system’s lack of intelligence and much more.

Just when you think you’ve seen it all, along comes an idea to use dead spiders as robotic grippers. Engineers at Rice University introduced the world to the concept of “necrobotics” explaining why turning dead wolf spiders into mechanical grippers.

According to the researchers, unlike people and other mammals that move their limbs by synchronizing opposing muscles, spiders use hydraulics. A chamber near their heads contracts to send blood to limbs, forcing them to extend. When the pressure is relieved, the legs contract. Internal valves in the spiders’ hydraulic chamber, or prosoma, allow them to control each leg individually.

The researchers ran one dead spider through 1,000 open-close cycles to see how well its limbs held up, and found it to be fairly robust.

Call me close-minded, but I don’t see necrobotics going mainstream. This made a lot of people inside and outside the robotics industry quite angry. And just a week later the decision was unanimously reversed. The proposal would have allowed officers to use robots to kill a suspect “when risk of loss of life to members of the public or officers is imminent and officers cannot subdue the threat after using alternative force options or de-escalation tactics.”

While Tesla’s humanoid prototype could do little more than walk and wave, Agility Robotics showed us that bipedal robots working alongside humans might not be as far off as we think. In April 2022, Agility Robotics gave us a look at the capabilities of its bipedal robot Digit, which brought in $150 million in funding that month. The video shows Digit handling packages and bins, loading them onto trucks, picking them up from shelving and even taking totes from human workers.

Digit has a max speed of 1.5 m/s and can run for 3 hours doing light work. Doing heavy work, the robot will last 1.5 hours. While right now Digit can only be used to move totes and packages and unload trailers, the company hopes to expand its capabilities to last-mile deliveries soon.

3D-printing microrobots with multiple component modules inside a microfluidic chip

AI material that learns behaviors and adapts to changing conditions

What is a Robotic Service Provider?